My MacBook Pro is getting old now and none of the new MacBook Pros interest me (butterfly keyboard? No thank you). Thus, I though I’d give it a fresh install to remove all of the garbage I’ve accumulated in five years. This was the perfect opportunity to finally organize my dotfiles in a public repository. After a whole weekend dedicated to that, here’s my reflection on this experience.

❡Balancing the power of dotfiles

Whilst dotfiles are by definition all of the configuration files and folders in your home ~ directory, most dotfiles repositories don’t stop there. They generally include a install.sh or bootstrap.sh script that restores everything when configuring a new machine. My biggest trade off was to define how intrusive this script should be.

How cool would it be if, when I set up a new computer, all I need to do is clone my dotfiles repo and run the install script to find my computer exactly how I like it. On the other hand, how often do you need to set up a new machine? In my case I hadn’t done that for five years so whatever my install script was going to contain, it had to be short and easy to maintain.

Here is the power I decided to give my dotfiles:

I guess my point is that I’m not 100% sold on the value of auto bootstrapping a new local machine. Especially if that happens less often than every year.

However, the process of creating those dotfiles itself was very rewarding. I went through various existing dotfiles and found new cool aliases and functions to use in my terminal. After reading enough of them I even had ideas to create new ones. Even watching other Brewfiles made me discover new applications that I didn’t know before.

Therefore, I decided to share in this article a few cool tricks that I ended up using in my terminal. You can find the rest in my dotfiles repository.

I am a big fan of using emojis to organize anything. Just like my commits, my Google Drive folders all start with an emoji followed by a space. The emoji represents a predefined category of folder which group them together when sorted alphabetically.

This time I decided to do the same with my Sites folder and I renamed it 🔥. It looks really minimal on my terminal and I know without even glimpsing that this is my current directory. Plus it’s weirdly motivating. I love it! 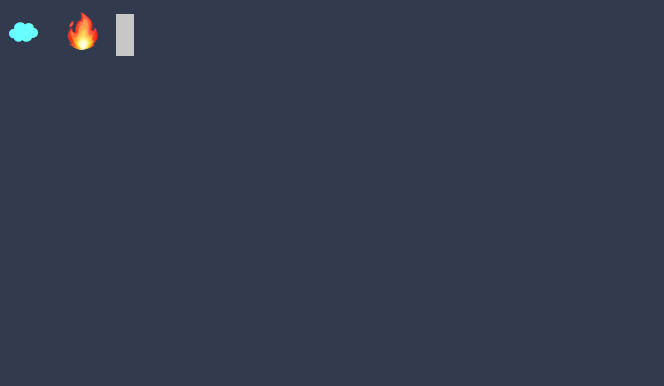 Of course typing cd 🔥 is not much fun so I created a fire alias.

A few aliases that probably save me a couple of minutes a day.

These functions let you commit everything with a personalised default message and clone via ssh by just typing the vendor/repo structure.

I also added a couple of useful git aliases.

This function shows you the weather of a given city directly in your terminal. Less for efficiency than because you can.

Every time I changed my shell configurations I had to open a new tab and remove the old tab for the changes to be effective. Not anymore:

Whilst this was an interesting journey, I enjoyed spending time improving my dev tools and my MacBook seems happier as a result. A big thank you to those who wrote dotfiles I got inspired from.