In my previous article, I explained the basics of Docker images and introduced a simple GitLab pipeline that runs our test suite and checks our code style. In this article, we will set up a more complex pipeline that ends up deploying our applications using Laravel Deployer 🚀.

Before diving into some code, let's take a minute to decide what we want our final pipeline to look like.

We can categorise those three points as Build, Test and Deploy which conveniently constitute the default stage definition of GitLab.

Below is the final pipeline that we'll have at the end of this article. ✨

GitLab provides two ways of sharing files across your jobs. This is helpful for our pipeline because we are relying on the output of the composer and npm jobs for the rest of our jobs. If we had to build before every job, there wouldn't be much point having a build stage in the first place.

The first mechanism provided by GitLab is caching. It is very similar to caching in Laravel, you describe what you want to cache and provide a key to retrieve the potentially cached content later.

This is mostly useful when using the branch as a key, e.g. master. That way we can share content across all of the pipeline within a branch and improve our pipeline performances.

On the image above, the test job is still running composer install in case we updated the dependencies but it will update from the previous /vendor folder and not an empty one.

The second mechanism provided by GitLab consists of generating artifacts. You can think of artifacts as the output of a job which will be automatically provided to the following stages. This output is simply a set of predefined files and folders that is zipped at the end of a job.

A cool side effect of artifacts is that you can download them directly from GitLab's UI when your pipeline is finished.

No need to choose when we can have both.

Note that the phpunit job only needs the composer artifacts and the codestyle job doesn't need any artifacts at all. We'll describe this in the configurations to avoid unnecessary downloads.

Finally, let's write some code! Create a .gitlab-ci.yml file at the root of your project if you don't already have one.

We'll be using my public Laravel Docker image which contains everything we need to use GitLab's pipeline on Laravel applications. Don't worry too much about what's inside for now, just plug and play.

The purpose of this job is to properly initialise our Laravel application by running composer install and making sure our .env file is valid.

Pretty simple stuff. Now we want to "output" the vendor folder and the .env file using artifacts so that jobs from the next stages can automatically inherit them.

Finally, we want to cache the vendor folder to make sure the composer job of our next pipeline will not create it again from scratch.

Very similarly to the composer job, we define a npm job responsible for installing our node dependencies and compiling our assets.

The phpunit job automatically inherits all of the artifacts from the composer and npm jobs. Therefore our composer dependencies and our .env file are ready to use. All that's left to do is to run phpunit.

Nice and simple. However, the npm artifacts are not necessary for phpunit to run successfully. We can avoid downloading unnecessary artifacts by explicitly telling the job what to use:

Since the lorisleiva/laravel-docker image already contains PHP_CodeSniffer, the codestyle job can run phpcs directly. Moreover it doesn't need any artifacts from any previous job to run successfully and can therefore disable all dependencies. We can do this by assigning [] to the dependencies key.

The deploying jobs are going to be a little bit more challenging then the previous ones. Let's start by roughly describing what the job should do. For convenience we'll only work with the staging job for now since it will be very similar to the production job.

All that's left to do is make the pseudocode work.

You might be wondering, how the hell are we going to make our GitLab pipelines communicate with our server?

The idea is much simpler.

Generate a new SSH key pair via ssh-keygen but be careful: 🚨

❡2. Give the public key to the server

❑  Copy the public key. pbcopy < ~/.ssh/id_rsa_gitlab.pub
❑  Connect to your server
❑  Paste the public key at the end of the ~/.ssh/authorized_keys
❑  If you are using Laravel Forge to maintain your servers, you can paste it using Forge's UI.

❡3. Give the private key to GitLab

❑  Copy the private key. pbcopy < ~/.ssh/id_rsa_gitlab
❑  Connect to GitLab and go to your project settings.
❑  Add a new variable called SSH_PRIVATE_KEY and give it the private key as value.

❡4. Initialise SSH on the pipeline

Now we can start a ssh-agent and tell it to use our $SSH_PRIVATE_KEY variable that we added on the previous point. GitLab provides us with a little script that does just that.

Note that the last line disables host checking which is convenient but can lead to man-in-the-middle attacks. If you'd rather manually define yourdomain.com as a known host, replace the last line with:

Since, we'll be reusing all of that script for our production job and potentially others in the future, let's extract it into a YAML template.

In order to deploy our Laravel application, we'll be using Laravel Deployer. It's a Laravel package I made that gives php artisan the power of zero-downtime deployment.

If you already have Laravel Deployer installed, you can skip these few steps:

For more deployment configuration check out the documentation or the video tutorials.

❡Using Laravel Deployer in your pipelines

Now that we have installed Laravel Deployer and established an SSH communication between GitLab and our server, we can call php artisan deploy directly within our pipelines. 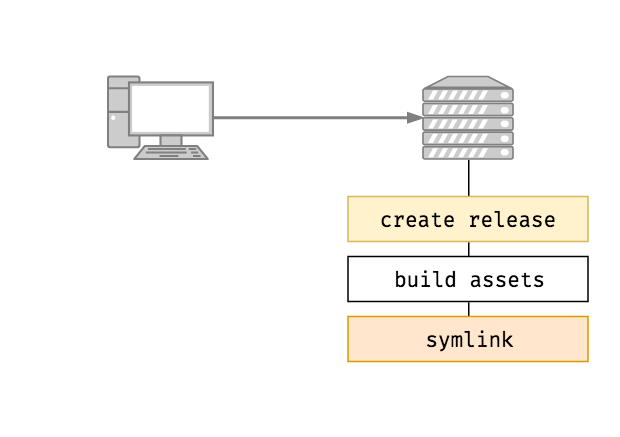 It's a shame because, within our composer and npm jobs we've already built everything. Basically, when reaching the deploying jobs, the content of our application is production ready. All we need to do is upload it into a new release. Which is precisely what the upload strategy does for us.

The upload strategy is available from version 0.2.3 of Laravel Deployer. 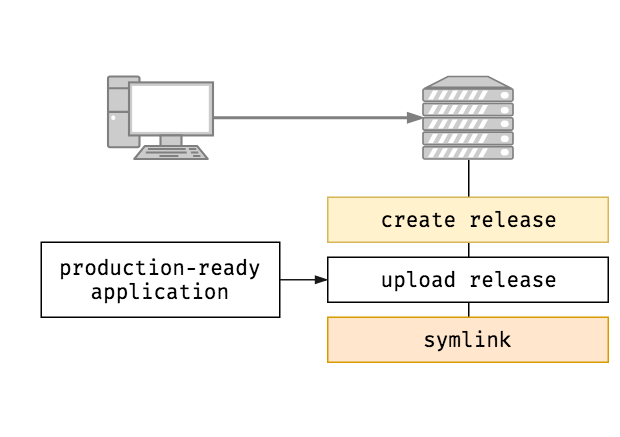 To specify which strategy to use on the command line, we can use the --strategy or -s option. Therefore we end up with the following command: php artisan deploy dev.yourdomain.com -s upload.

We can now copy/paste the staging job to create the production job. It is basically the same except that the domain and the environment name change. We also add the when: manual option which makes sure the job won't be executed until someone clicks on the "play" button.

One last thing. There is currently an issue on GitLab regarding the file permissions used by default when cloning on pipelines. Basically the file permissions are not strict enough but if they change it, it will break some existing features. This is a security issue for us because we are deploying those files with those "lazy" permissions on our production server.

I have no doubt an official solution will arise from this eventually but in the meantime, it is safer to change the permissions to what Laravel uses by default. We create a new template script that we then use in our deploying jobs.

Note that we omit the vendor folder because otherwise our jobs won't be able to access the binaries that allow us to deploy our application. The upload strategy updates the vendor folder anyway as it doesn't cost much thanks to composer's cache.

Phew we did it. It is a pretty hardcore thing to set up but once its done, its hugely useful! I hope you didn't hit too many problems along the road. Don't hesitate to share your questions and ideas in the comments.

Are you able to SSH into your server directly (via the command line)?

I can't attach screen shot to this comment ya.

It might be better if you open an issue on the repo directly so you can provide more information and other GitHub users can jump in and help as well.

Hi there, 👋 thanks I'm glad it helped.

To be honest, Laravel Deployer has not really been designed for this use case and I think that if you are going full K8s, you might benefit more from other deployment tools. If you do go down that road, I'd be interested to read about your journey to K8s. 🙂