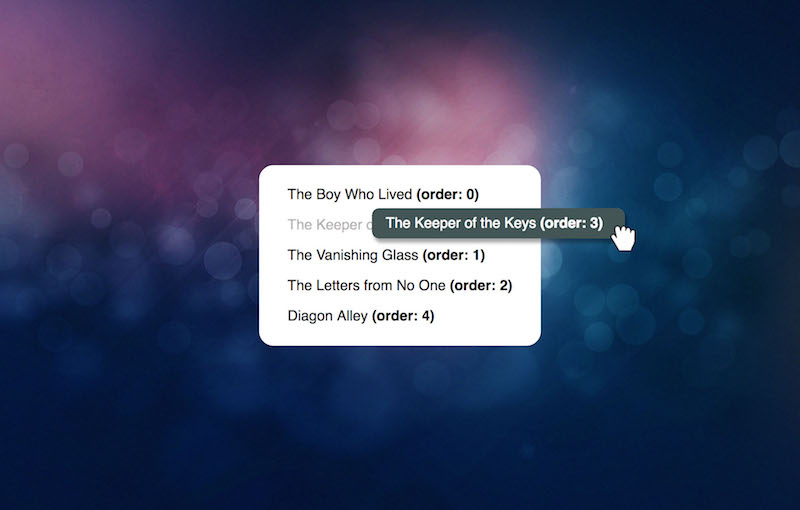 When you need a quick drag&drop that reorders your data as well as elements in the DOM.

Whilst the Dragula library has mastered the art of quick and easy drag&drop, it still has to be complete enough to appeal to a vast majority of projects. As a result it can be pretty cumbersome to implement a very simple drag&drop reordering that keeps track of the new order within your data.

VueJS has a few plugins that helps us encapsulate Dragula but they also carry a lot of complexity that most of my projects don't need.

Therefore, I decided to create a little directive that I can copy/paste into components that need data reordering using drag&drop.

Let's say I have an array of chapters each containing an order property which is used to display them in the order requested by the user. What we want is a simple drag&drop directive that reorders the DOM elements but also reorders the chapters array and edits the order properties accordingly. Let's start by writing the directive's usage as we wish it could be and we'll make it happen.

With that first line, we tell our directive v-dragdrop to:

You can find a working example in the CodePen below.

See the Pen Drag&Drop made easy by Loris Leiva (@lorisleiva) on CodePen.

Let's go through the steps of creating such a directive. I believe its important to understand how to create such a directive in order to be comfortable reusing it and modifying it in future projects.

We start by creating a Dragdrop.js file with the following code.

This code makes sure that we bind dragula to the container and unbind it when we don't need it anymore. The problem with this implementation is that the drake global variable is shared with all components that use that directive. Therefore it only works with one drag&drop list.

However, in most use cases, I only need a new drake instance per drag&drop list. Dragging & dropping items from different lists together is out of scope when all you need is reordering a list.

Therefore, every time we bind a new dragdrop directive to a container, we add a mapping between that container and the drake instance just so that we can destroy it when we're done with it.

Since the container received in the bind function and the one received later in the unbind function have different object references, I instead bind the array of elements from VueJS to the drake instance.

For the sake of clarity, the above code uses two helper methods.

So far, all we've done is dynamically bind and unbind Dragula to our containers. Whilst this will magically enable dragging and dropping DOM elements, it won't do anything about our chapters array in VueJS. We need to do this logic ourselves by adding some event listeners.

The above code uses the following helper methods.

Implementing this is quite easy. We start a counter from 0 and go through the reordered array's items assigning and incrementing that counter.

And that's it! Next time you need to reorder some array by dragging and dropping just pull that code in a directive and use it wherever you like.

If more control over dragula's options is needed (like adding a handle), one can easily use an options attribute (similarly to the order attribute) to register these options when instantiating Dragula.